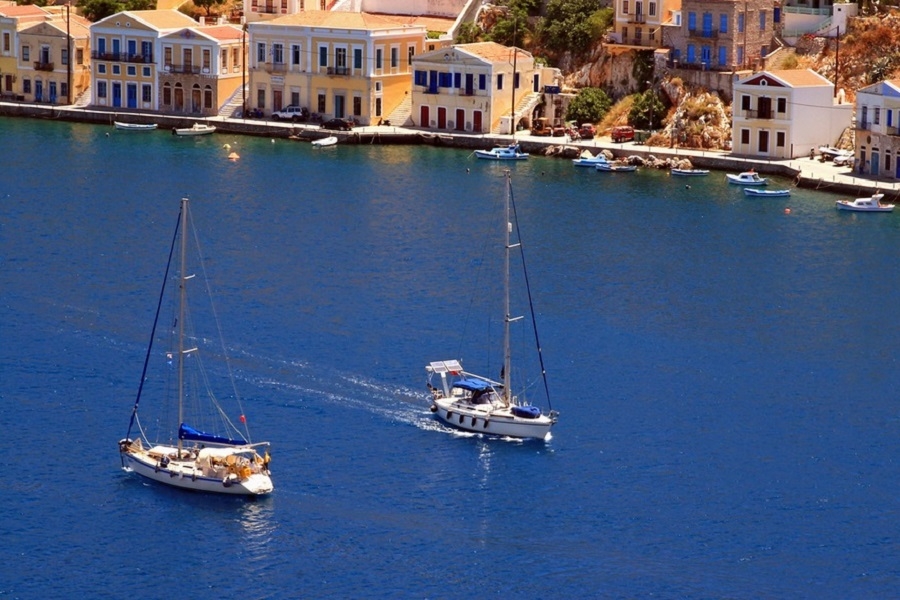 Dodecanese islands compose one of the most beautiful destinations for sailing holidays in Greece. Located in the southeastern Aegean Sea, Dodecanese is a complex of small islands with fabulus small bays ideal for anchorage and exclusive holidays on a sailing yacht. The traditional small ports in each island compose a beautiful sight seeing, giving the opportunity to explore an alternative aspect of Greece. Yachts can be chartered from Rhodes or Kos islands, where operate marinas with all facilities allowing for the preparation of an ideal sailing trip.

Sailing conditions are of medium difficulty. The winds get stronger during main summer months, July and August, but are considerably milder than main Aegean Sea. The formation of islands and the nearby Asia coastline offer natural protection to the sea area and when winds get stronger, there is always another island nearby to offer reliable coverage. So get ready and enjoy a two week sailing trip around some of the most idyllic islands in Greek Waters.

Our embarkation took place on Saturday afternoon from Rhodes marina. After we purchased the necessary supplies of food and drinks from neighboring stores, we embarked on our yacht and soon we were sailing the beautiful sea. We headed northwest toward Simi island and the safe bay of Panormitis at the south of the island. The distance is 22 nautical miles (nm). As the locals had advised us, in case of strong winds we had better sail close to the Turkish coastline to get covered from the winds, and then head toward west, toward Simi. Panormitis is a famous place to anchor due to its monastery as well as the wonderful sunset, where you can relax watching the sun sinking into the deep blue of the Aegean Sea.

Next day we enjoyed breakfast and a swim in the turquoise waters of the closed bay and later in the morning we headed north to the main port of Simi island (distance 14 nm). On our way to the port we found two small bays for a short swim. We made a little stop in Pedi bay and we used a land line to protect the yacht from gusts entering the bay. Once we reached the port we berthed. It's needs a lot of caution when anchoring, since the port is very narrow and it's quite possible to catch the anchor's chain to the yachts at the opposite side of the port. Because of the limited berth spots in the port, it's better to arrive early, between 10:00 and 13:00 to find a safe spot. The town in the port is traditional affected by Enetic style and the houses around the port offer an awesome spectacle.

The third day we continued west to the port of Palloi in Nisiros island. After 5-6 hours of happy sailing (34 nm) we berthed in the small port. Wind became stronger after we passed the mainland peninsula at star board although in the afternoon the wind faded out gradually. Palloi port is a quiet place with few spots and only some houses around. Really relaxing place.

Nisiros island is famous for its volcano, still active on the top of the mountain. You may visit by taxi the area where steams come out of the ground with the smell of sulfur prevailing all over. It's a spooky and unique sensation.

The next day, Tuesday, we continued northeast to Kos island. We sailed east of the islet of Gyali – we decided not to stop there although we could see clearly the wide bay at our west, and reached the old port of Kos, after 22 nautical miles. The marina of Kos offers safe berth with full facilities but berthing is expensive (rates depend on yacht's size) so, the old port is a preferable solution. When entering the port keep west and berth at the jetty straight ahead. It's a busy town in one of the most touristic islands of Greece. At night we enjoyed a few drinks in the bars, among young people from all over the world.

The next day we headed to the island of Pserimos, ten miles toward east. The cape at the northeast side of Kos needs high attention, because swallow waters keep long from the shore. Read the map carefully before starting the trip, and be careful while sailing through the area. The small fishport of Pserimos lies at the southeast side of the island. There is a sandy beach around the port and a few houses. The sea is unspoiled, we enjoyed our swim in the idyllic bay and dinner in one of the small tavernas of the village.

The next day we left Pserimos heading toward the north, to island Leros. In between, we had a short stop at the east coast of Kalimnos, after an hour of sailing. There are numerous bays to anchor, we chose the Vathi (in Greek language the name means Deep, following the shape of the narrow and deep bay. We used a line ashore (toward the north coast of the bay) to secure the yacht since there is only little space for adequate anchorage and enjoyed our swim. When sailing to Vathi, be cautious about the fishponds just before the bay but close to the coast of Kalimnos. It is not suggested to stay overnight to Vathi, so we continued up north toward Leros. We berthed in the small port of Pedeli, at the east coast of the island, 20 nautical miles in total from the port of Pserimos. Although we berthed in the port, many yachts spent the night around on their anchor, safe since the bay is protected from north wind.

The next day we continued the trip toward the island of Lipsi. First we made a stop at the north side of Leros, at the islet of Archaggelos. A very beautiful and peaceful place and an ideal destination too. Soon we continued up north to Lipsi. The port of the island lies 11 miles from the bay of Pedeli in Leros. There are small islets a mile before the port, where you can also moor, depending on wind conditions. Makronisi, the bigger of the islets has an impressive cave at its eastern coast, attracting visitors to watch. Leros has a small fish port, a few spots to berth and water / electricity supply by the dock.

The next day, the trip continues to Patmos. You may also make a stop by Aspronissia, an islet at the northeast of Lipsi, but it needs a lot of attention due to the shallows when approaching. As all times, check the map carefully before the trip and also while approaching. The distance from Lipsi port to Patmos is 11 nautical miles, but if you visit Aspronissia first, the distance is as much as 20 nm (it's extra five miles to go to Asponissia and then back by the port of Lipsi to continue to Patmos. Berth in the port of Skala, that provides with all required facilities, electricity, water and market for food supplies.

It is time to start the way back to Rhodes island. There are many miles to cover and almost another week for the trip. The first destination after the most northern spot of our trip was Leros island. We sailed south for 20 nm to the west coast of Leros and berthed in the port of Laki. There is a relatively big marina in Laki with plenty of spots to anchor, as well as numerous bays around it for staying on anchor. We enjoyed the evening with a walk on the road around the beautiful port.

The next day we sailed to Kalimnos, further south for another 20 miles. We berthed in the picturesque bay of Emporios, at the northwest coast of the island. It's a peaceful place with crystal waters and a wonderful sunset. We had a relaxing evening and dinner on board since we needed to prepare for next day's long trip to Nisiros.

We started the trip in early morning since we had to cover 30 miles until Nisiros island. We sailed by the west coast of Kos and then turned east, near the islet of Gyali. Soon after we berthed again in the port of Paloi. Tired after almost 6 hours of sailing, we spent the rest of the day swimming and relaxing on the boat. We had a delicious dinner in a fish tavern at the port.

The next day, we continued further south to the island of Tilos. We berthed in Livadia at the east side of the island. We stayed just on anchor since the small port had no available spots when we arrived. We were fine with this, since the bay offers very good shelter to north winds.

We left Tilos and sailed closer to Rhodes, to islet Alimia, about 19 miles to the south. We had a stop in the bay of Alimia and a wonderful swim surrounded by a wonderful landscape. After a meal we headed to the west and the island of Halki. We left beautiful Alimia heavy hearted, but the beauty of Halki port satisfied us for leaving Alimia. We walked around the alleys of the village, a wonderful experience.

Day 14 – Friday: Return to Rhodes, end of the trip

The next day we completed our trip to Rhodes port. We had a long trip of 35 miles by the north coast of Rhodes, sailing toward east. This created beautiful sailing conditions, so we enjoyed the last trip bringing the memories of two weeks around those magnificent destinations. We berthed at the port by mid day and spent the rest walking around the monuments in Rhodes town. We spent the last night on board and dissembarked early Saturday morning. It was an unforgettable experience.

Note: Above data (distances, berthing information, etc.) are included merely for informational purposes and are not accurate. Please assess a nautical chart before your trip, to ensure a safe and pleasant trip.

More in this category: 1 week sailing around Dodecanese islands »
back to top 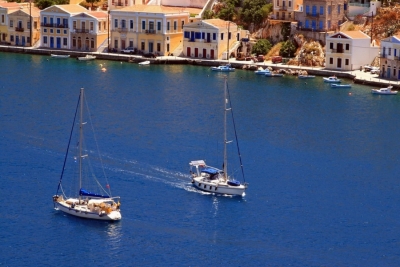 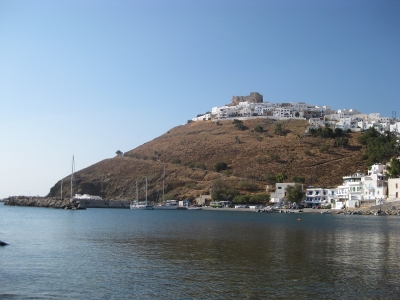